For highlighting code inside latex documents there are several options:
This might be a judgement call, but I don't find the latex output of listings or highlight to be visually pleasing enough, but maybe it is just a lack of understanding on how to customize them. Anyway, jedit has the Code2HTML plugin which does a good job of translating the buffer being edited in jedit into html markup, preserving pretty much everything that appear on the jedit text area. This takes advantage of jedit mode files which offers a great deal of flexibility, including nested languages, such as javascript/php, or R and Sweave if you have the right mode files.
So I had a look into the code of the Code2HTML plugin which is simple enough, and have basically done a big s/html/latex/g to support latex output (I realize this is not the best option and I should probably abstract things out so that it would be easier to add new formats: ansi, svg, ...) but it does the trick for now. Here is a screenshot of an example file edited in jedit: 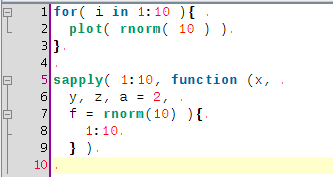 And a screenshot of the pdf file 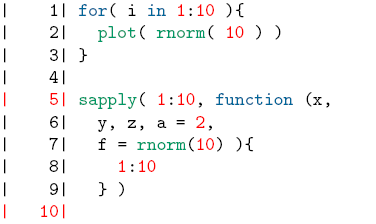 Here are the relevant files if you want to try it out: Next steps: