trump hex and R only version 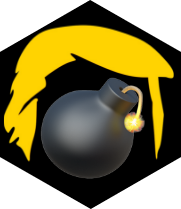 Since last time, I discovered a way to bomb an R session with just R code. You just have to attach an object of S3 class “UserDefinedDatabase” that isn’t one. So I updated the trump package on github, and gave better documentation with a gif.

"UserDefinedDatabase" are not just in R for the sole purpose of bombing the session, it is a feature of R that is not widely known that can be used to attach to the search path things that act like environments but are not.

To use them you have to write some C code to react to lookups. I’ve been using them for real things in the RProtoBuf and rJava packages, and more recently for an evil purpose in evil.R so that anything that starts with a capital letter is automatically bound to 666.

It is typically discouraged to use the feature offered by "UserDefinedDatabase" and if you still use it you have to make sure it answers very quikcly because it will be interrogated many many times.

It breaks on these lines of the R source :

because there’s just no way to convert the object we created to an external pointer to an R_ObjectTable struct.